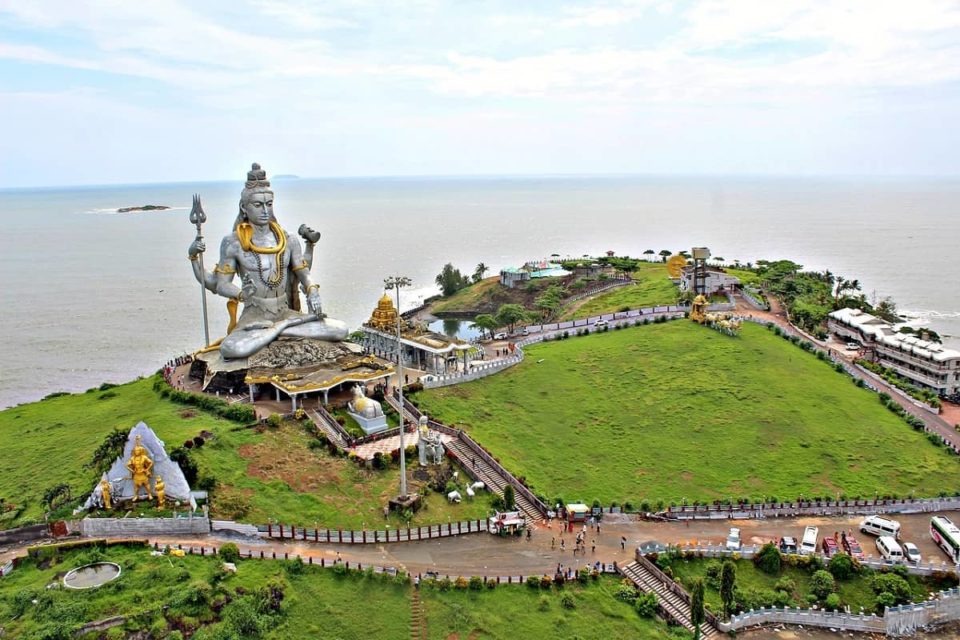 Located in Bhatkala Taluk of Uttara Kannada district in Karnataka, India, is Murudeshwar town. This place is a well-known pilgrimage dedicated to Lord Shiva and considered to be the second-largest Shiva statue (123 ft) in the world. The main idol worshiped in the temple is Sri Mridya Linga, which considers part of the original soul Linga (Lord Shankar).

Pilgrims come from different places to see the vast and magnificent statue of Bholenath. The height of the idol of Lord Shiva is so high that it can be visible from far away, and it took two years to make the idol of Lord Shiva. The Murudeshwar temple situates on a small hill called Kanduka Giri, surrounded by the Arabian Sea on three sides.

The history of the Murudeshwar temple dates back to the Ramayana period. According to the Puranas, Ravana king of Lanka worshipped Lord Shiva with devotion, and Lord Shiva grants him Atmalinga with the condition that it should not keep on the ground until he reaches Lanka. Agreeing to the words of Lord Shiva, Ravana started back his journey to Lanka.

While Ravana, on his way, Lord Ganesha appeared and made him fooled by using his trick, which forces the king to put down Linga on the ground at Gokarna. It made the king anger and destroyed the linga. In the process of uprooting, the pieces of Linga fall into five different places, which form a chain of temples of Lord Shiva. The cloth that covered with the Atmalinga flew off and landed on Kanduka hill, later this place named Mrideshwara, currently famous as [Murudeshwar].

Who built the Murudeshwar Temple?

The Murudeshwar Temple constructed by the businessman and philanthropist R.N. Shetty.

Places to Visit in Murudeshwar

There are many attractive and scenic places you will find during the visit of Murudeshwar Temple. They are as follows:

Statue Park is a significant attraction of [Murudeshwar], and the most prominent places to visit around Murudeshwar. In statue park, there is a statue of Lord Shiva about 15 meters high, which remains the center of tourist attraction.

The park is famous for its beautiful environment, natural greenery, and beautiful flowers. Also, there is a small pond inhabited by ducks, and an artificial waterfall is worth seeing.

Murudeshwar Fort located behind the famous [Murudeshwar] Temple, which is worth seeing. The history of this fort is related to the kings belonging to the Vijayanagara Empire. It is a belief that after Tipu Sultan, no one had renovated Murudeshwar Fort.

Bhatkal beach is one of the major tourist destinations in the vicinity of Murudeshwar temple. This beach invites tourists to come and have fun on its beautiful velvety sands situated on the shores of the Arabian Sea and surrounds by its attractive coconut trees.

Netrani Island is also famous as ‘Pigeon Island’ situated on the coastline in Murudeshwar, Karnataka. If one looks at Netrani Island from a height, it looks like a heart. Tourists can enjoy scuba diving and snorkeling in the calm waters of the Arabian Sea. Indeed Netrani Island is one of the best places in India for Scuba diving.

Jamia Masjid located in Bhatkal and considered to be one of the oldest mosques in the area. The structure of the three-storeyed Jamia Mosque features Persian inscriptions, ancient history, and a sense of spirituality.

One among the best beaches in the state of Karnataka is Murudeshwar beach surrounded by hills, where tourists attract around a year. One can view the sunset at this beach. Tourists indulge in swimming, fishing, and sunbathing at [Murudeshwar] beach.

What to shop in Murudeshwar?

One can enjoy shopping in [Murudeshwar] while visiting Murudeshwar Temple and its tourist places. One can buy souvenirs, statues, handicrafts, and pens to jewelry boxes in the [Murudeshwar] market. Beautiful clothes also purchased in this place.

The best time to visit Murudeshwar considered being between October to May. The festival of MahaShivaratri celebrated here with great pomp in the [Murudeshwar] temple, which falls during February-March. Devotees come in large numbers to visit Bholenath on the occasion of Shivaratri.

November – January is an excellent time to visit this place, especially for scuba diving. Winter is the best time to attend due to reasonably cold temperatures, and from June- September, this place receives heavy rainfall, and it is better to avoid at that time.

What is the time taken to visit Murudeshwara Temple?

A maximum of 2-3 hours is enough to visit the Murudeshwara temple and see Lord Shiva.

One who is looking to stay in the right place after visiting [Murudeshwar] Temple and its significant tourist places can find hotels from low-budget to high-budget. One can choose the hotels according to convenience and budget.

Murudeshwar place is not only famous for its beautiful tourist places and the charming atmosphere, but the food here is also delicious. The taste of delicious food here will make you lick fingers. One can taste South Indian, North Indian, and Chinese cuisine in [Murudeshwar].

Murudeshwar temples are not in contact directly through airways. The nearest airport to Murudeshwar is Mangalore International Airport (IXE), which locates at a distance of about 137 km. From Mangalore Airport, you can easily reach [Murudeshwar] Temple with the help of a local taxi.

The [Murudeshwar] temple well connected to all the cities around it by road. With the help of a bus, taxi, or your vehicle, you can easily reach [Murudeshwar].

Travelling to Pakistan from the UK? Here Are Some Tips for You

Best Resorts In Kerala For Honeymoon

What To Pack For Your Next Trip To Europe

Is Merino Wool Good For Travel?