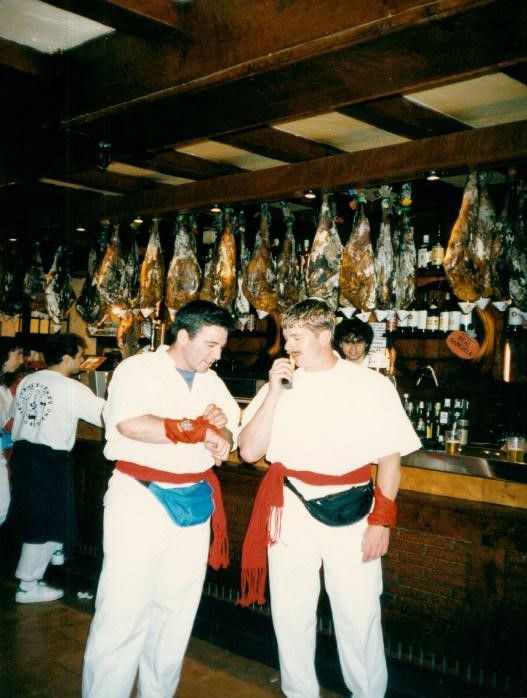 July 3rd, we were all packed up, and with our leave papers in hand, we boarded our flight out of SeaTac Airport for the red-eye flight to Paris.  Like eager young sailors on our first liberty call, we entered the coach cabin, found our seats, and commenced to do what sailors do best…start drinking.   Once airborne, with the seatbelt sign off, we stood up and headed to the back of the plane to “chat up the flight attendants.” How cool were we?  Naval aviators and all, flying in the Big One (Desert Storm), and how we were off to run the bulls.  How could they not be impressed?  This theme continued throughout the vacation with the same results…not much.

Flying across the pond (Atlantic) via the great-circle route, our flight lasted nine and a half hours.  Needless to say, we got little sleep, but sure consumed our share of alcohol prior to landing.   Touching down outside of Paris at seven in the morning we deplaned and headed toward baggage claim.  And that was when the downward death spiral began.

Through our alcoholic haze, it dawned upon us that we were in Paris, but how the hell do we get to Spain?!  In our rush just to get out of the states before our skipper rescinded our leave we failed to even plan the second leg of our journey from Paris, France to Pamplona, Spain.

However, like all intrepid explorers, we didn’t panic (we were just too hungover for that).  We decided to sit down and have a morning brew and a croissant, we were in Paris after all.  Unlike the states, the Europe rail system was well organized.  All we needed to do was get out of the airport and to a major train station in Paris and grab a seat on the next train to Spain.   Remember, this was 1993, way before the internet became ubiquitous.  So, we had to do it “old school” – we improvised.

After grabbing a taxi and arriving in Paris, we quickly found a kiosk where we could buy a Paris map and started exploring our options.   As we sat there, like the trained navigators we were, jotting down our train schedule and routes on the back of a napkin, we thought that a glass of wine on the Seine would help facilitate our creative juices and help clear the fog that had descended into our brain from the flight over to the continent.   Over drinks, in a café on the left bank, with the sun climbing higher and higher in azimuth into the crystal blue sky, we devised a cunning plan.  We were to take the train to San Sebastian, a city on the border of Spain and France.  Once there, we would take the feeder route up to Pamplona to continue our Hemingway experience.  The first leg was on the high-speed train (TGV) to Bordeaux and then we would switch trains to San Sebastian.  Recognizing that the trains to Bordeaux and then to San Sebastian were leaving from Gare du Nord in the north part of Paris, we finished our drinks in the “City of Lights” and departed to the station for the overland portion of our journey.

Prior to boarding the train, we felt it necessary to blend in with the locals, to remain as inconspicuous as possible – as it were.   We would act French and buy more wine and baguettes for the ride.  Boarding the coach class car, which still allowed smoking, we soon found our seats, sat, and surveyed the other passengers.  We then opened our bottle of wine and prepared to enjoy the vistas of traveling through the French countryside.  Well, as one could predict, one bottle turned into two, which turned into three, etc., so by nightfall, we were once again drunken sailors.  Around midnight, the train came to a screeching halt in Bordeaux.  As we stumbled out of the train and tried to talk to anyone who could understand our drunken English, or broken French, we were told that the gages on the tracks needed to be adjusted for the Spanish train to take us to San Sebastian.   The conductor then informed us that the train would be ready at 4:00 am.  Looking at our watches, we realized we needed to be on the new train four hours hence to continue our trek.  But we dare not fall asleep in the chairs outside the train station café, because if we missed our train, we would miss the train to Pamplona from San Sebastian.  So, again we resolved to stay up and continue drinking because…. WHAT COULD POSSIBLY GO WRONG?!

As luck would have it, we met a French sailor on leave.  To this day I cannot remember this chap’s name but dressed like Kirk Douglas in 20,000 leagues under the sea with the blue and white sailor shirt and bellbottom pants, he looked like he was out of central casting.  With our French shipmate, we continued to drink and tried to communicate throughout the night.   Being gregarious, and naturally curious consumers of all things Hemingway, we convinced our new mate to imbibe with us several of the drinks that were mentioned in his books – we tried Absinthe, Chartreuse, and others as we mixed our way toward the worst possible hangovers one could expect.   However, we scoffed at the thought of a hangover, until, of course, it was actually upon us.  But that would be many hours away.

Around 4:00 am, with the predawn light announcing a new day the conductor called for the boarding of our train to San Sebastian.  Once again, we stumbled into the coach class cab, as it slowly lurched out of the station heading to Spain.  With the daybreak now lighting our train we looked at each other in our puerile way and then it started to dawn upon us what shipwrecks we were becoming…

About the Author: James Feldkamp is a retired US Naval Officer, having served as US Naval Flight Officer, Counter-Measures Officer, and Navigator for the Navy’s carrier-based attack aircraft, the EA-6B. In 1991, Jim Feldkamp served and flew off the USS Midway during Operation Desert Shield and Desert Storm. Later affiliated with the U.S. Naval Reserves, Jim served as Special Agent for the FBI in Norfolk, Virginia, where he became founding member of the organization’s Joint Counter Terrorism Task Force. Jim resigned from the FBI in 2004 to run for Oregon’s District 4 Congressional seat. He ran as the Republican nominee for the District 4 seat during the 2004 and 2006 election cycles. Currently, Jim serves as a Subject Matter Expert at Georgetown University, where he is developing a course centered on “Terrorism and Unconventional Threats.” He formerly taught undergraduate courses in domestic and international terrorism as adjunct professor at George Washington University, and George Mason University.

Tour Guides And Travel Writers Find Fulfillment Despite The Pandemic